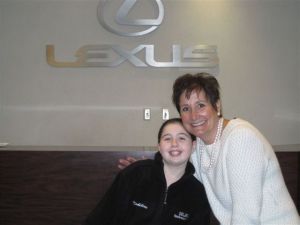 The toughest issues average 11-year-olds face on a daily basis involve choosing an outfit or completing homework.  Madeline Tallman is not your average 11-year-old.  Koons Lexus of Wilmington, a longtime supporter of the Juvenile Diabetes Research Foundation (JDRF), recently sponsored her as a Youth Ambassador.

Madeline, a bubbly sixth-grader, was diagnosed with Type I (Juvenile) diabetes when she was just eight years old. Not one to succumb to her new reality as a diabetic, she almost immediately became involved with JDRF. She was the 2010 Gala ambassador, created a family walk team named “Maddie’s Mob,” and established “Tween Girls”—a group which brings other Type I diabetics together for social events.

And Madeline has continued her work to end Type 1 diabetes. She submitted the winning essay out of 25 applicants in Delaware to represent the state as their JDRF Youth Ambassador.

Leigh Encarnacian, Customer Relations Manager at Koons Lexus, believes that Madeline is a truly worthy recipient of that honor. “She is a wonderful girl. She’s a typical 11-year-old with hope in her eyes living her new normal,” Encarnacian said. “It tugs at your heart, because she lives with a pump.”

As the Ambassador, Madeline will attend the Children’s Congress in Washington, DC in June. Koons Lexus of Wilmington’s contribution to the JDRF will not only help defray Madeline’s cost for the trip, but will also make a concrete impact on the fight to find a cure for this disease.

“A cure would mean everything to me and so many other people,” Madeline said. “This is so important because that would make my life more care free like other kids my age. I could wake up and not worry about feeling awful in the midst of the day. I could be at lunch and not be worrying about not finishing everything…and neither would any other diabetic.”

The Lexus Corporation matched the Koons Lexus of Wilmington donation through their Pursuit of Potential program.

Koons wishes you all the best Madeline and we look forward to hearing about your trip to the Children’s Congress. 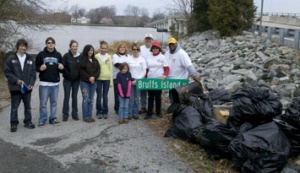 Project Clean Stream volunteers pause from the clean up for a photo.

I’m so proud of our team at Koons Easton Toyota!  On Saturday, April 2, 2011, employees and family members pitched in to help Project Clean Stream.  This is an annual stream and shoreline clean up coordinated by the Alliance for the Chesapeake Bay and partnering watershed organizations.

There were 11 volunteers: co-workers, families and friends turned out at the site in Unionville to clean up and remove 23 bags of trash and debris from streams and wooded areas throughout the town. Koons Easton Toyota volunteers included Theresa Griffin, Jill Harrison, Kevin Deshields, Terry Carney, and Liz Disimone.

This is the eighth year the Alliance, their partners and sponsors have organized cleanups for the Chesapeake Bay area through Project Clean Stream. In 2010 more than 3600 volunteers helped to remove over 118,000 pounds of trash.  This year, clean up was performed at even more sites and will continue on April 9th and 16th.

Keeping our streams clean is vital to protecting the Chesapeake Bay –  home to thousands of plants, fish, waterfowl – and Maryland’s own Blue Crab.  To get involved or for more information on Project Clean Stream click here.

Meet the Mechanics at Koons Kia

Koons Kia of Woodbridge held their quarterly Owner’s Clinic last week to introduce customers to the mechanics who would be maintaining their cars.

“I know this is an Owner’s Clinic, but I prefer to call it a ‘Right from the start’ clinic,” said John Fee, General Manager of Koons Kia Woodbridge. “This is your opportunity to meet the people who will maintain the car that you just purchased. We want to take care of your needs right from the start.”

One of the best parts of my job is meeting new customers.

The thirty-five people in attendance received information on service hours and talked with the Woodbridge employees about their service questions. One audience member asked about changing a tire and received a firsthand demonstration.

Vehicles today are much more sophisticated than they used to be.  Koons Kia’s ‘Right from the start’ party is a great way for our customers to learn more about their brand new Kia and Koons in general.  Every person who asked a question received a lottery ticket. Other giveaways included first aid kits, GPS devices, tire pressure gauges, car wash buckets, tire brushes, and gift certificates for oil changes.  Guests got to nosh on mini-subs, pizzas, and cheese sticks from Joe’s Pizza. Chicken fingers and fries were available for the children.

The Woodbridge Kia store is one of our organization’s fastest growing brands. The dealership began as a used car outlet in May 1994. Then in June 2009, the store picked up the first Koons Kia franchise. Initially they were selling seven to eight Kias per month. In March 2011, they sold 84 new Kias.

The store plans to hold its next Owner’s Clinic in June. Check the Koons Kia of Woodbridge facebook page or my blog for more details.